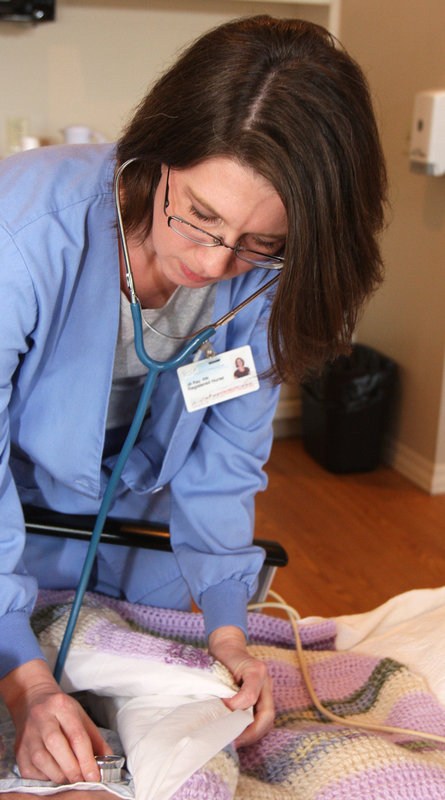 Somebody gets “hospice,” they get dignity for the final days, or weeks, and rarely, months.

Yet if proposed cuts in South Carolina’s Medicaid program go through, more than a thousand patients across the state – and their families – will lose hospice care before death.

Dignity will die, as will the patient.

Dignity happened anyway Monday at Hospice & Community Care in Rock Hill, in the room of a lady patient.

Nurses Jill Ray and Marsha Wellmaker and Dr. Amy Robbins went over the life of a woman with words that included “easing suffering” and “grace” and “love.”

They whispered over that woman and acted so gingerly and all their focus was on making the end of life less painful.

That beauty at the end of life could soon be cut.

“It is a blessing to help a person, and a family, and help them handle what dying brings,” said Wellmaker.

“The reward of life,” she said.

So many of the terminally ill who have the double-whammy of being terminally poor will die at home, or in a hospital bed, or in a nursing home – never getting the dignity in dying that hospice provides.

When people say “hospice was called in,” they do not refinance mortgages. Bananas bought are yellow.

People who get hospice care, almost always, soon die. But before that death, there is medical care for the patient, and social work for the patient and family – even spiritual care. Then, there is bereavement care after the death.

And if the services provided are cut, that means job cuts to nurses, social workers, aides – the people who provide the care.

Hospice providers are calling the proposed cuts “devastating” and “not making sense.” Hospice care is cheaper than the terminally ill ending up in emergency rooms followed by long-term hospital care, advocates say.

“This would cut out the best, cheapest option,” said Jane Armstrong, executive director of Hospice & Community Care in Rock Hill, which operates York County’s only in-patient hospice house. “Plus, it will absolutely mean people will lose jobs. These are desperate times.”

Hospices receive money from Medicare, Medicaid and private insurance sources. Medicare for people over age 65 and Medicaid for children under age 21 are not part of the suggested state cuts, said Armstrong.

However, hospices have endured Medicare cuts too and more are planned, said Dawn Teachey, CEO of Hospice Care of South Carolina, with offices in all 46 counties in the state.

“Hospice is getting hit on both sides,” Teachey said. “There will be hospices that close. There will be layoffs and services cut.”

“This plain does not make sense,” Inkelaar said.

State Rep. John King, D-Rock Hill, vowed Monday to fight the proposed cuts to services offered to the most vulnerable people of the state, describing the cuts offered by the Republican-dominated budget board and Legislature as “inhumane to the average citizen.”

King described the cuts to hospice as “death without dignity.”

At Hospice & Community Care, seven of 65 patients are Medicaid-only reimbursements, but typically Medicaid is about five percent of the agency’s income for services.

A loss of even five percent would be hurtful and the agency held an emergency board of directors meeting Monday to talk about how Medicaid cuts might affect services in 2011.

“This is as serious as it gets,” said Gwen Thompson, board president.

Advocates for hospices are expected at today’s S.C. Budget and Control Board meeting. They will argue and fight to maintain dignity for the less fortunate.

The patients, though, will not be there.

They will be home in hospital beds in living rooms, where hospice aides will soothe them.

They will be at homes for the aged and poor.

They will be at Hospice & Community Care’s Wayne T. Patrick Hospice House, where on so many days somebody dies who had received Medicaid to pay for the service.

One such somebody was William “Sonny” Cameron, who walked the streets of Rock Hill until cancer killed him a couple of months ago.

He spent his dying days at a hospice where the few who knew him could visit. He received medical care, and spiritual care, and love.

No more, if the cuts go through.

Sonny Cameron would just die, maybe in a hospital. Maybe in his one room where he lived – alone.