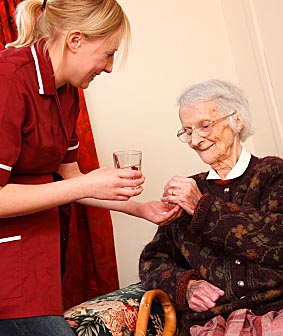 Health Agency To Halt Some Cuts In Services To Poor

Columbia resident Carolyn Stover said she was dismayed to learn last month that the state was cutting hospice care for her mother, Nellie.

Monday, Stover was thanking God and citing the power of prayer after state officials said they will continue to pay for that care.

The state Department of Health and Human Services said it will rescind a number of budget cuts that were to take effect today or in April, including eliminating state-paid hospice care.

The embattled state health agency, which pays for care for the poor, is running a deficit of more than $228 million at the same time the state is struggling with its own budget crisis — an $854 million revenue shortfall for the budget year that starts July 1.

The cutbacks that the health agency announced last month were intended to save $13.8 million. But the new head of Health and Human Services said Monday the cuts would have cost the state more money in the long run than they would have saved.

So, new agency director Tony Keck said the state will continue paying for hospice care, supplemental home-care services, nutritional supplements and 14 home-delivered meals a week, which it had proposed to cut to 10.

All had been threatened with elimination or reduction previously.

The agency also said it still will pay for some adult dental services for poor patients undergoing chemotherapy, about to have an organ transplant or who are pregnant. The state had proposed eliminating all adult dental care for the poor.

Stover, who lost her job before Christmas, said she worried about what she would do if the state ended hospice care.

“It’s been a blessing,” Stover said. “There’s been a lot of prayer going out for this. I thank God for whoever touched their hearts to change their mind.”

When the state said it would end the hospice care, Stover said she questioned whether she could afford the supplies needed for her mother and what she would do without the support of the staff at Hospice Care Tri County, which walked Stover through what to expect and the stages of end-of-life care.

“They are there for you 24 hours,” said Stover, 61. “She couldn’t get into a nursing home because they were full. It’s hard for one person, doing it by themselves.”

Health agency director Tony Keck said Monday that his agency will give preference to services that cost a little upfront but save money in the long run as it examines ways to close its current $228 million budget deficit.

“Those specific cuts right there go to the heart of trying to keep people out of more expensive institutions,” Keck said, rescinding the previously announced cuts.

For example, Keck said Monday the state should allow patients to choose home-based care, rather than more-expensive emergency room care.

Health care is similar to a balloon, he said, if you squeeze short-term costs you may increase costs elsewhere.

Keck will appear today before a House health care budget subcommittee, and some lawmakers are antsy to hear his suggestions about how the state can reduce its health care costs.

At the same time, a Senate panel will debate a proposal to allow Keck’s agency to cut the amount that the state pays doctors and hospitals to treat the poor.

“I’m hoping to hear what the plan and strategy is for the director and new governor,” White said, adding without it, “It’s kind of hard to move forward.”

Keck said he will emphasize there is no single solution to rising health care costs. Instead, he said, the state needs to stack many smaller health care cuts, savings and efficiencies to fill his agency’s deficit.