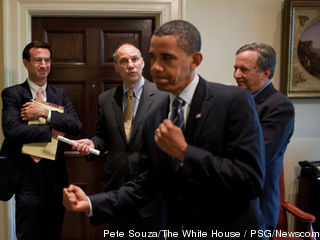 The political damage to President Obama’s health care law may already be done. But there’s a curious backstory to the report this week from a major consulting firm study that found “ObamaCare” would lead to fairly dramatic unintended consequences.

The consulting firm McKinsey & Company was thrust into the political spotlight Tuesday after it published a study — at odds with the expert consensus — finding that, once fully implemented, the health care reform law will drive huge numbers of employers to drop or dramatically restructure their companies’ health care benefits.

The predictable fallout led Democrats, and several reporters, to press McKinsey for the survey itself — a request McKinsey has declined on the grounds that the material is proprietary.

But multiple sources both within and outside the firm tell TPM the survey was not conducted using McKinsey’s typical, meticulous methodology. Indeed, the article the firm published was not intended to give the subject matter the same authoritative treatment as more thorough studies on the same topic — particularly those conducted by numerous think tanks, and the Congressional Budget Office, which came to the opposite conclusion. And that’s created a clamor within the firm at high levels to set the record straight.

“This particular survey wasn’t designed in away that would allow it to be peer review published or cited academically,” said one source familiar with the controversy.

All sources were granted anonymity, in order to be able to speak candidly about the controversy.

Reached for comment today, a McKinsey spokesperson once again declined to release the survey materials, or to comment beyond saying that, for the moment, McKinsey will let the study speak for itself. However, McKinsey notes that the survey is only one indicator of employers’ potential future actions — that the conclusions remain uncertain and employers’ future decisions will ultimately depend on numerous variables. The three authors of the report were not immediately available for comment.

Another keyed-in source says McKinsey is unlikely to release the survey materials because “it would be damaging to them.”

Both sources disagree with the results of the survey, which was devised by consultants without particular expertise in this area, not by the firm’s health experts.

A third source speculates that the firm may have reached its outlying conclusion by basing its questions on the firm’s own advice to clients on how best to arbitrage the new reforms. Specifically, under the law, employers could devise their benefits packages in ways that makes them unappealing to lower-income employees, who would then have to enter the exchanges. Though TPM could not confirm this, the conclusion is supported by a disclosure within the McKinsey study itself.

“Our survey shows significantly more interest in alternatives to ESI [employer sponsored insurance] than other sources do, for several reasons,” the report says. “Interest in these alternatives rises with increasing awareness of reform, and our survey educated respondents about its implications for their companies and employers before they were asked about post-2014 strategies. The propensity of employers to make big changes to ESI increases with awareness largely because shifting away will be economically rational not only for many of them but also for their lower-income employees, given the law’s incentives.

Emphasis added. None of the sources were able to provide TPM a copy of the proprietary survey material.

Republicans, and reform opponents, seized on the report’s conclusions to sow further suspicion of the law. That prompted a response directly from Nancy-Ann DeParle, the White House’s point person on health care. On the official White House blog, she noted that similar health reforms in Massachusetts led to a growth in employer sponsored insurance, and cited numerous other studies that reached precisely the opposite conclusion.

“This one discordant study should be taken with a grain of salt,” she wrote.