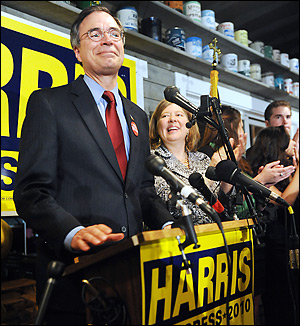 Newly elected conservative congressman Dr. Andy Harris, a physician from Maryland who won election by campaigning on an anti-Obamacare platform, isn’t happy that he has to wait 28 days for his government provided health care plan to become effective.

It seems that the health insurance coverage provided to Members of Congress requires a 28 -day waiting period before it becomes effective. Considering that most group policies typically require waits of up to six months, the Congressional health care program isn’t such a bad deal –but not good enough for Dr. Harris who has made his reputation as a staunch critic of government provided health care.

When informed of the short waiting period, Dr. Harris rose to his feet during a freshman orientation session and asked why it took so long for his health insurance to kick in. He also wondered if he could purchase insurance from the government to cover him during the gap?

It’s called COBRA, Congressman. Check it out. You dig into your pocket for 3 or 4 weeks and pay the premium to bridge the short gap between your previous policy and the health care coverage the taxpayers will be providing to you so that we might benefit from your alleged expertise in issues relating to the nation’s health insurance system.

While the news that this physician might have to write a check to get his short term coverage needs satisfied may be something of a bummer for the newly elected Congressman, he can take a measure of solace in the knowledge that, unlike the millions of Americans who have lost their health care coverage as they lost their jobs, Dr. Harris’ pain and suffering will come to an end just 28 days after it begins.

For the many Americans who have either used up their COBRA coverage or could never afford it in the first place, things aren’t quite so simple.

With the good doctor’s federal coverage just around the corner, Congressman Harris will be able to regain the peace of mind required to go forward with his agenda of repealing Obamacare, secure in the knowledge that his family is well protected as he works to deny anything resembling the same to millions of other American families.

While this story is producing the inevitable chuckles around Capitol Hill, one wonders if the 155,000 people on the eastern shore of Maryland who voted for Harris – along with the many in the district who didn’t bother to vote at all – are finding this all that funny?

This guy was elected because he is a physician who opposed health care reform and, allegedly, had the expertise to do something about it.

With that in mind, wouldn’t you think that someone in his district would have spent a little time ascertaining if Dr. Harris actually knew anything about the system he is promising to impact upon?  I mean, COBRA isn’t exactly a hidden aspect of our health insurance system. Anyone who has ever had a job and lost it – or read a newspaper on any given day during the last two years – is pretty familiar with the program.

What’s more, if Dr. Harris understands how the health insurance system works, how could he possibly ask a question about the government selling interim coverage? You don’t have to be an expert to know that COBRA exists for precisely this purpose and that the federal government is not in the business of interim coverage.

In expressing his disapproval with the matter, The Congressman-Elect pointed out,  “This is the only employer I’ve ever worked for where you don’t get coverage the first day you are employed.”

Lucky him. Most Americans who have received their health coverage through their employment know that there is typically a waiting period so that the insurance company can avoid pre-existing conditions that might have motivated the employee to take a job primarily to get the health insurance that comes with it.

The bottom line here is that Dr. Harris – the man elected to Congress by the voters of Maryland’s 1st Congressional District – clearly knows very little about the American health care system he was sent to Washington D.C. to change.

If these Marylanders are feeling a bit sheepish and embarrassed as their new Congressman makes a complete ass of himself in front of the nation, they are getting precisely what they deserve. When you vote for a representative without bothering to ascertain if he knows what he is talking about, you get Dr. Harris. And when you don’t bother to vote at all, you take what you get and forfeit the right to complain about it.

Unfortunately, the rest of us are stuck with the result of your failing to take these elections seriously.