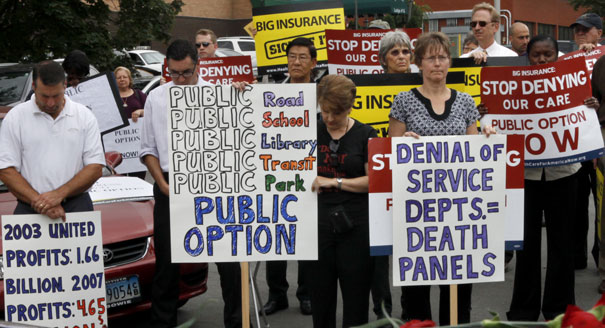 The reliance on grass-roots activists is part strategic and part financial. | AP Photo

As Washington’s health care advocates steel for another push by Congress to rein in entitlement spending, their focus is less on K Street and more on Main Street, where a patchwork of activists stand ready to help — and for cheap.

For the many nonprofit advocacies working to shield Medicare and Medicaid from cuts — as well as the activists on the other side, who are pushing to slash spending — the reliance on grass-roots activists to pressure Congress is part strategic and part financial.

It is also a necessity. What many of the national health care advocacies lack in funding, or even access, is often offset with on-the-ground enthusiasm that funnels back to Washington.

Health care advocates again will have to mobilize those same forces. Over the next two weeks, congressional leaders will name 12 lawmakers — six Democrats, six Republicans — to a special supercommittee charged with finding hundreds of billions of dollars in health care savings.

“In many ways, this doesn’t change things,” said Ethan Rome, executive director of Health Care for America Now, which is likely to fight deep Medicare and Medicaid cuts. “It creates a new urgency and a new intensity. In a city that needs deadlines, this gives everyone a hard deadline to work within.”

Under legislation signed by President Barack Obama on Tuesday, committee members must craft a blueprint to reduce government spending by at least $1.2 trillion by Thanksgiving. Then, Congress will have to vote on the package by Dec. 23, just before its traditional year-end recess.

If it all fails to come together, across-the-board spending cuts that would hit health care providers and the defense sector would be triggered.

The tools used by traditional lobbying groups versus those favored by on-the-ground advocates can at times look very different, even if they are trying to achieve the same goals.

Where hospital and physician groups have almost unfettered access on the Hill, advocacy groups like Health Care for America Now, the Medicare Rights Center, and Families USA instead prefer to channel community-level activists to help rally support for their cause.

“A lot of people inside Washington will use this to make their lobbying world even smaller,” Rome said, referring to a targeted approach that focuses solely on the committee and its staff. “We’re going to make it bigger and make sure there’s a conversation all across America.”

“We’re going to use every tactic available to make sure that everywhere members of Congress turn, they will be forced to say which side they’re on,” Rome said.

Even groups that envision a different a different path for entitlement programs — and will fight to prevent any tax hikes — typically use a similar approach to rally the faithful.

“There are informal talks about what kind of outreach we want to have,” said Alex Cortes, executive director of Let Freedom Ring.

Cortes’s group, a conservative counterweight to many of the left-leaning advocacies, played a key role in organizing grass-roots support for a Republican-led effort to “Cut, Cap and Balance” the federal budget. The group partnered with the Tea Party Express, the Club for Growth, FreedomWorks, Club for Growth and other advocacies to organize a campaign to sway lawmakers to support the budget recommendations.

“There’s no way we’re going to sit on the sidelines for this,” he said.

“We do all of that, actually,” said Pamela Tainter-Causey, communications director for the National Committee to Preserve Social Security and Medicare. “We’ll send letters to Congress; we’ll activate our volunteer and activist base.”

David Lemmon, director of communications at Families USA, said the group is “doing some brainstorming now, reaching out and coordinating with other groups to see how we can work with them. … We’re working with advocacy groups, working on letters to the editor and a pretty in-depth radio tour.”

Lemmon said the group plans to release a report in September that shows how important Medicaid is to low-income individuals who suffer from serious health conditions. The release of the report will be timed to coincide with the return of Congress, he said.

“The key point is, we’re making our voice heard,” he said. “That’s an important part of it.”