What Rep. Ryan’s Budget Proposal Would Inflict On Seniors 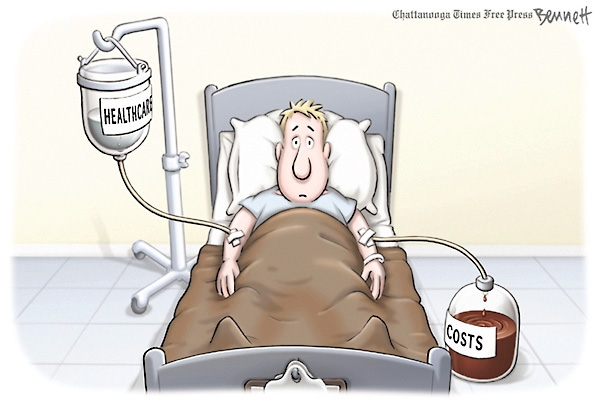 From Dean Baker’s blog Beat The Press at The Center for Budget and Policy Research:

“Rep. Ryan Proposes Medicare Plan Under Which Seniors Would Pay Most of Their Income for Health Care”

That is what headlines would look like if the United States had an independent press. After all, this is one of the main take aways of the Congressional Budget Office’s (CBO) analysis of the plan proposed by Representative Paul Ryan, the Republican chairman of the House Budget Committee. Representative Ryan would replace the current Medicare program with a voucher for people who turn age 65 in 2022 and later. This voucher would be worth $8,000 in for someone turning age 65 in that year. It would rise in step with with the consumer price index and also as people age. (Health care expenses are higher for people age 75 than age 65.)

According to the CBO analysis the benefit would cover 32 percent of the cost of a health insurance package equivalent to the current Medicare benefit (Figure 1). This means that the beneficiary would pay 68 percent of the cost of this package. Using the CBO assumption of 2.5 percent annual inflation, the voucher would have grown to $9,750 by 2030. This means that a Medicare type plan for someone age 65 would be $30,460 under Representative Ryan’s plan, leaving seniors with a bill of $20,700. (This does not count various out of pocket medical expenditures not covered by Medicare.)

Furthermore, the portion of income going to health care costs will increase through time according to the CBO analysis. This is due both to aging of individuals and to increasing health care costs through time. As noted insurance for older beneficiaries will cost more than insurance for younger beneficiaries, but Representative Ryan’s voucher would still only pay the same amount for their care. This means that if the average 80-year-old cost twice as much to insure as the average 65-year-old, then the premium that would come out of a seniors’ pocket would be twice as large. This implies that if the program had been in effect for 15 years in 2030 then the average senior would be paying $41,400 for a Medicare equivalent insurance package in 2030, 25 percent more than the medium earner’s benefit in that year.