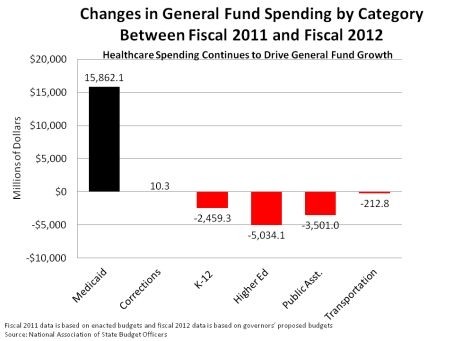 Medicaid advocates breathed a collective sigh of relief when the debt debate wrapped up early this week. The entitlement program, initially seen as vulnerable in negotiations, was protected from across-the-board cuts in the trigger deal.

A federal exemption, however, is only half the story. States, who also foot a big chunk of the Medicaid bill, also shape the program. Looking at crunched budgets, states are weighing some big changes to their Medicaid programs that could vastly reshape the program’s financing.

“Don’t think things can stand still just because Medicaid was exempted,” says Tevi Troy, an official with the Department of Health and Human Services under President George W. Bush and a senior fellow at the Hudson Institute. “It cannot stand still with states looking at the expected growth level. Standing still really isn’t an option.”

Enhanced funding for Medicaid included in the stimulus ran out last month. States will spend an additional $16 billion of general fund revenues on Medicaid next year, the National Association of State Budget Officers recently projected. That’s at the same time that states will likely slash funding for education, public assistance and transportation.

Facing numbers like these, many states are clamoring for permission from the Obama administration to overhaul their programs to reduce costs. Last month, Utah proposed modifying its delivery system to look like the Accountable Care Organizations envisioned in the health reform law.

Betting that the new ACO model will save the state money, Utah also wants to get its Medicaid costs under control. The state wants to tether its per-person Medicaid spending to growth in the general revenue fund. So if state funds grow slowly, or if they drop, so does the budget for the entitlement program. If the money doesn’t cover the bill, Utah would create a list of benefits that they’d start cutting, from the bottom up.

“If Utah’s state revenue increases by 15 percent, then that’s going to have very little impact on patients,” says Lincoln Nehring, senior health policy analyst at Utah Voices for Children. “But if state revenues aren’t going gangbusters, there’s the likelihood of us having to move to Plan B and cut some benefits.”

Nearly every state faces a Medicaid budget crunch. On Monday, Florida proposed moving virtually all of its Medicaid patients into private, managed-care plans. Don Berwick, administrator for the Centers for Medicare and Medicaid Services, spent Thursday hearing from California advocates protesting a proposed 10 percent cut to Medicaid doctors’ reimbursements, The Hill reports. A Texas bill passed this session requires the state to seek block grant funding — a request the administration is near certain to deny — while New Jersey is also preparing to request a sweeping new waiver.

“We have a little bit of a subtrend developing, which is that, in advance of the Affordable Care Act and the expansion of Medicaid, more states are pursuing redesign waivers,” says Joan Alker, a senior researcher at the Georgetown Health Policy Institute.

The Obama administration may have taken Medicaid off the table in the spending cut negotiations, but the issue is very much on the table in statehouses and won’t go away soon.