July 18, 2011 | Health Care Law Implementation, In The Courts, In the news, Medicaid

From The Associated Press: 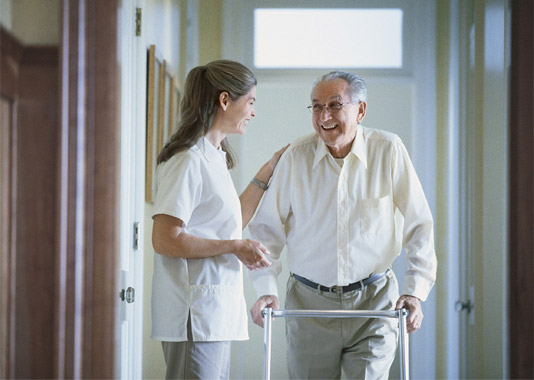 Born with cerebral palsy, Jennifer McPhail relies on a home health aide to help her get dressed for work and ready for bed at night.

Her motorized wheelchair keeps her active, working as an organizer with a disability rights group in Austin, Texas, and volunteering to help people find housing and to staff hurricane shelters. She now fears deep cuts in the state’s Medicaid spending will prevent her from living independently.

“What it says to me is that the state doesn’t value the lives of people with disabilities,” said McPhail, 39. “A lot of people are going to be hurt in a very intimate way.”

It’s a concern facing families across the country as states with gaping budget deficits cut home health services that help keep the elderly and disabled out of nursing homes. States are reducing how much time a nurse can spend making house calls and ending meal deliveries for the homebound. Many also are gutting adult day care programs that give seniors a safe place to spend their days while their relatives are at work.

Aging and disability services in three out of four states have been reduced over the last two years or face cuts, even though demand is increasing.

Texas lawmakers underfunded Medicaid by nearly $5 billion in the state budget, a move that home health advocates say leaves the elderly and adults with disabilities unsure how their care at home will be provided.

California eliminated funding for about 330 adult day centers, a move that will affect some 35,000 seniors who use them for medical care and socializing. Lawmakers are hoping to restore about $85 million to transition seniors into an as-yet undetermined alternate program — about half the amount cut from the budget.

Minnesota is considering cuts to home health aides and a program that allows disabled people to live on their own.

With each cut, the ability to live at home becomes more difficult.

“You end up losing control over your decisions,” said Neil Johnson, executive director of the Minnesota HomeCare Association.

About 12 million people receive home health services nationwide, according to the National Association for Home Care and Hospice.

Home health services are an easy target for budget-cutters because they are not required by federal law, have been subject to fraud and don’t have deep-pocketed special interests advocating for them. But down the road, steep cuts in these services eventually could cost states more money if they end up pushing more people out of their own houses and into nursing homes that would require taxpayer subsidies.

“Just because you cut the budget doesn’t mean their needs go away,” said Anita Bradberry, executive director of the Texas Association for Home Care & Hospice Inc.

Medicaid, the state-federal program that pays for medical and long-term care for the poor and disabled, is generally required to help fund nursing homes but not home care and community services.

Because the programs are not required, most states first look at cutting home health care funded through Medicaid, even though such programs are much cheaper than nursing homes.

The price of an adult day health center is $67 a day on average, compared with $229 a day for a private room at a nursing home, according to a 2010 survey released by insurance company MetLife Inc.

Overall, Medicaid spending on nursing homes came to $46.5 billion in 2007, the latest figures available, while home health services cost $6.3 billion, according to the U.S. Department of Health and Human Services.

Before the recession, states actually expanded home health programs because they are less costly. But now, with so many states facing billion-dollar deficits, lawmakers say they have no choice but to cut Medicaid spending, the second-biggest spending item for states behind education.

South Carolina is ending payments for adult dental and vision care. In Massachusetts, Gov. Deval Patrick has proposed cutting $55 million from the state’s adult day care program, two-thirds of its funding. That would affect some 5,200 participants.

Among them is the 81-year-old mother of Irva Almonor.

She agonized for months over what to do with her mother, who was forgetting to take her diabetes medicine and turn off the stove inside the Massachusetts home they share, before enrolling her in an adult day center.

The family feared she would hurt herself — or worse — while she was alone, and she resisted any thought of going into a nursing home.

Without the adult day health care centers, Almonor’s only choice would be to leave her mother, who suffers from diabetes and mild dementia, alone again at their Holliston, Mass., home. Quitting work wasn’t an option, and hiring a home health aide would cost her about $21 an hour.

“Financially, I can’t afford to have anyone to come take care of her,” she said.

One problem for home health care programs is image. Some lawmakers are skeptical of the industry that provides the services and say lax regulation makes the program susceptible to fraud.

A New Mexico woman was sentenced to three years in prison in January after she and another woman were convicted of claiming to be each other’s caregivers and getting more than $96,000 in Medicaid benefits.

Investigators in Florida a year ago found that when they tried to visit 16 home health agencies, there were no such businesses at the addresses.

The report went on to say the number of home health care agencies has risen dramatically in states where fraud concerns have emerged, including California, Texas and Florida.

Home health advocates say that kind of bad behavior is rare and that cutting funding only hurts people who need the most help.

In most cases, it’s the family members who provide much of the care for the elderly and disabled at home — and usually for free — even if they get help from home-health aides.

Adult day care centers provide another avenue for the frail and their caregivers, but those programs also are on the wane.

Several states have been chipping away at adult day care programs over the last year and some have eliminated them, even though the number of facilities has grown by a third since 2002, according to a 2010 study from the National Adult Day Services Association.

Mary Nonnette, who lives in Hawthorne, Calif., isn’t sure how she will take care of her mother if she is no longer eligible to stay at one of the centers in Los Angeles.

Nonnette, 67, said she does everything for her 87-year-old mother “except breathe, really,” and that she has provided the care alone since her husband suffered a paralyzing stroke in December. The only time she’s free to visit her husband is when her mother is at the center.

“For four hours, three days a week, I don’t have to worry,” Nonnette said.

It’s not just home-health services for seniors that are under attack.

Washington state slashed how many hours it will reimburse professional caregivers who work with the disabled.

The changes that began this year mean home health worker Deborah Osborn, of Tacoma, Wash., had to cut 19 hours from the time she can spend with a 27-year-old developmentally disabled woman.

The state now limits her to 40 hours per week. That might still sound like a lot of time, but Osborn’s client relies on her for assistance with everything from grocery shopping to dressing herself.

As a result, Osborn can help the woman shower just twice a week instead of three times. Laundry is limited to twice a week and grocery shopping is down to once a month. Any more state cuts will force the woman out of the home she shares with a family member, but it’s too dangerous for her to live by herself, Osborn said.

“She’s going to suffer the consequences,” she said.