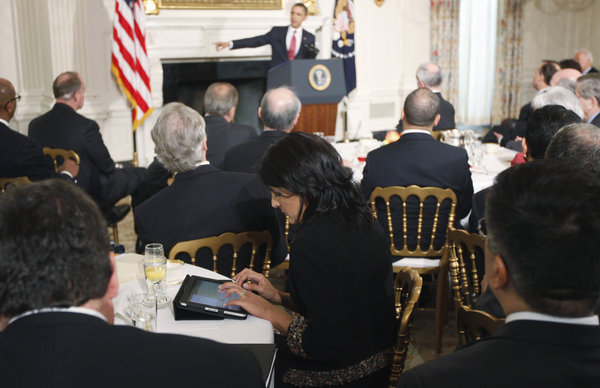 The Haley administration is leaving hundreds of thousands of federal health-care dollars in limbo when the money could be spent right away to help uninsured residents, patient advocates said.

For the second time in recent weeks, advocates said consumers are being harmed by what they called politically motivated dallying, as the state fails to spend federal money it requested to implement health care reform.

At issue now is a $441,000 “consumer assistance” program intended to help South Carolinians learn about changes to health insurance and enroll some of them for coverage under the federal Patient Protection and Affordable Care Act.

The South Carolina Department of Insurance, which received the money from a federal agency in October, said it would use the grant to:

–Hold eight educational forums around the state, where officials would discuss health reform and hand out new pamphlets detailing changes.

More than seven months into the yearlong grant, officials from the state Department of Insurance, the agency in charge of the money, acknowledged they have made little progress.

In fact, the department seems to have reversed course, shunning the goals it had set out to accomplish in its September grant application submitted to the U.S. Department of Health and Human Services.

“The money is sitting there,” said Sue Berkowitz, an advocate for the uninsured who heads the Appleseed Legal Justice Center. “They’re not doing what they promised the federal government they would do when they got this grant.”

In the application, then-insurance department Director Scott Richardson said the department wanted the funds to help “in implementing the important reforms to our health care system provided under the Affordable Care Act.”

The application said the department planned to hire a project manager, a program assistant and four student interns to run the consumer-assistance program.

Spokeswoman Ann Roberson said in an email last week that the department “will not be hiring any additional personnel.” In the email, she said, “We are not going to spend public dollars unnecessarily as we are trying to be good stewards of taxpayer money.”

The Post and Courier reported last month that Gov. Nikki Haley failed to appoint a consumer advocate on the 12-member committee that will determine how South Carolina should handle its insurance “exchange” — the online marketplace where health insurance will be sold once federal reform takes full effect in 2014.

Consumer advocates worry that their interests will be overlooked if they are not properly represented on that committee.

The newspaper also reported that the Haley administration would not seek any additional federal money to set up an exchange.

Consumer advocates like Berkowitz and Teresa Arnold of the South Carolina Chapter of the AARP said the federal-funding snubs are politically motivated, intended to distance the Haley administration from the federal health law.

Insurance Department spokeswoman Roberson dismissed the criticism, saying in an email, “Our motivation is to improve health care in South Carolina by improving access to the private insurance market.”

“We are very concerned about where this leaves South Carolina; people do not have information about the Affordable Care Act and what is available to them,” said Shelli Quenga, a program director at the Palmetto Project.

“A lot of residents have never had insurance and don’t know what premiums, co-pays, deductibles and out-of-pocket expenses even mean. They need a place to go and get this information,” Quenga said.

The Palmetto Project, a non-profit community advocacy group with offices in Mount Pleasant and Columbia, originally was in discussions with the Department of Insurance to be an “outreach partner” that could have gotten some of the grant money to manage the consumer assistance project, Quenga said.

A call late last month from the deputy director of the department, however, deflated those plans.

Jim Byrd, the state official in charge of the federal grant, told Quenga that the project would rely on free help from AARP instead of hiring personnel, she said.

Arnold, the AARP’s legislative director in Columbia, said her group cannot handle all the outreach work that must be done. The state’s grant application calls for “far more than we can do,” and Arnold explained as much to state officials, she said.

“We have a very targeted audience,” Arnold said of the retiree membership group, which represents only a fraction of residents who will be affected by changes under health care reform.

Byrd did not directly respond to emailed questions from the Post and Courier, and released statements only through Roberson.

“We regularly meet with stakeholders including, but not limited to, not-for-profits, government agencies and faith-based organizations to expand consumer education and outreach,” according to Roberson’s statement.

A variety of public health advocacy groups contacted by The Post and Courier last week said they were unaware of any meetings to date. A spokesman for the S.C. Department of Health and Human Services also said his agency has not met with the Department of Insurance regarding the grant.

A grant progress report for the quarter ending April 30 shows the only spending so far was $18,500 for “data processing services.” Department spokeswoman Roberson said more grant money has not been used because “the volume of consumer inquiries has not increased significantly at this point.”

Quenga, of the Palmetto Project, said the reason for that is clear.