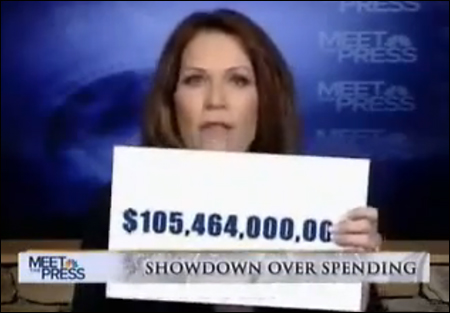 “There was a Congressional Research Service report that just was issued in February, and we discovered that secretly, unbeknownst to members of Congress, over $105 billion was hidden in the ‘Obamacare’ legislation to fund the implementation of ‘Obamacare’. This is something that wasn’t known. This money was broken up, hidden in various parts of the bill.”
–Rep. Michele Bachmann, March 6, 2011

“This is a crime against democracy. No one knew that Harry Reid, [Nancy] Pelosi and Obama put $105 billion in spending in the bill. … This is a bombshell.”
–Bachmann, March 8, 2011

You have to give Rep. Michele Bachmann credit. The Minnesota Republican certainly knows how to command attention — and how to liven up a dreary discussion of the federal budget on the Sunday morning talk shows by holding up a sign that declares: “$105,464,000,000.”

Even in Washington, $105 billion is real money.

But her assertion raises questions. Is it possible for a major piece of legislation, carefully analyzed by the Congressional Budget Office before final passage, to “secretly” contain so much spending? Let’s find out.

Bachmann is correct that there was a Congressional Research Service report issued in February, titled “Appropriations and Fund Transfers in the Patient Protection and Affordable Care Act.” It is actually an update of an earlier report first issued in October.

In January, former Rep. Ernest Istook (R-Okla.) wrote an analysis of the October report for the Heritage Foundation, decrying what he saw as “an attempt to handcuff the current Congress” with directives on spending in future years. “Obamacare was designed to be the governmental equivalent of kudzu — growing everywhere, propagating by multiple means, and sinking in its roots and becoming impossible to control,” Istook wrote.

Here’s where it gets complicated. There is a total of $105 billion identified over 10 years in the CRS report, though only three programs, worth a little more than $25 billion, are funded the full 10 years.  Most of the other programs listed in the report are funded for just a year or two, or perhaps five years. If Congress wants to alter this spending, it will need to pass a new law.

Istook, in an interview, acknowledged, “Congress has the authority to change this, that’s absolutely right,” but as a former member of the Appropriations Committee he believed it is inappropriate for a bill authorizing new programs to also fund so many of them.

Administration officials and other analysts, however, note that regularly appropriated money — also known as mandatory spending — is common in major pieces of health care legislation involving Medicare, Medicaid and the like. There are many other programs in the bill that are subject to annual appropriations, just not the ones identified in the CRS report.

While Bachmann in her television appearances echoed Istook’s argument that Obama “tied the hands of Congress,” her main points have been that “this money was broken up, hidden in various parts of the bill” — something akin to a “slush fund” — and that it was done “secretly, unbeknownst to members of Congress.”

This is bordering on ridiculous. The Congressional Budget Office, the official arbiter of congressional legislation, conducted extensive analyses of the health-care bill. Many of the specific programs identified in the CRS report were listed and examined in the CBO reports that were regularly issued as the legislation made its way through Congress. The CBO reporting also included estimates of the spending for these programs year by year. For complicated reasons, the numbers in the CRS report and the earlier CBO reports are not always exactly the same, but much of it was there in plain sight.

In fact, Bachmann is only talking about half of the ledger.

We have noted there are issues with how that deficit figure was reached, but it is disingenuous of Bachmann to talk only about the costs without noting that, in theory, all of this spending is fully funded.

There is a further problem with Bachman’s charge of “hidden” spending. The CRS report refers repeatedly to the many announcements made by the Department of Health and Human Services in recent months that it had spent some of the money authorized by Congress.  In other words, the administration has not tried to hide this money at all; instead, it has trumpeted each dollar spent in a press release.

As for the claim that “this money was broken up, hidden in various parts of the bill,” we think she means that there were different sections in the legislation, depending on the issue.  This is common practice for virtually all major bills, and it is not unusual or nefarious at all.

Bachmann’s spokesman did not respond to a request for comment.

There is no “bombshell” except Bachmann’s bombast.

She is correct that Congress already has appropriated some spending in future years, but her claim that this money was “hidden” does not have credibility. The money for these programs was clearly described and analyzed by the Congressional Budget Office before the legislation was voted into law.

(About our rating scale)