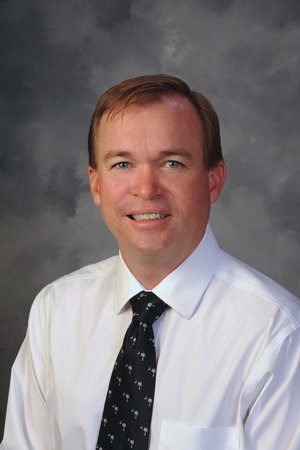 LAKE WYLIE — The debate over how to get the nation’s fiscal house in order – and whether all will carry a fair share of the burden – came to northern York County on Wednesday night at a town hall meeting hosted by U.S. Rep. Mick Mulvaney, R-S.C.

More than 400 people packed the Life Center at River Hills Community Church in Lake Wylie to hear the freshman congressman from Indian Land talk about the nation’s deficit and spending and to ask questions about the future of Medicare, taxes, the economy, food safety, airport security and the rising cost of health care.

Mulvaney, who serves on the House budget committee, has given the talk at such meetings with 5th District constituents about 16 times since he took office, he said.

“We’ve all heard it since we were kids. You get into trouble when you borrow too much money,” he said.

Doing nothing about the country’s spending habits and deficit will have catastrophic consequences, he said. The only way to address both problems is to drastically reduce spending.

Raising the retirement age, overhauling entitlement programs such as Medicare and Medicaid, reforming the tax code so more people pay taxes, and closing tax loopholes are part of the solution, he said.

Wednesday night’s most contentious moment came when some in the audience criticized changes to Medicare that House Republicans, led by U.S. Rep. Paul Ryan, R-Wis., are proposing.

Under Ryan’s plan – which Mulvaney supports – the government would end direct support for Medicare costs and begin subsidizing taxpayers’ private insurance costs starting in 2022. Taxpayers would pay more of their own health care costs, estimates show.

One woman asked Mulvaney why ending subsidies to oil companies aren’t a part of the discussion, while changes to programs such as Medicare are.

She identified herself as an Exxon Mobil shareholder who “wants them to make money. But the budget should not be balanced on the backs” of more vulnerable citizens, she said, adding that as a Catholic she believes in “social justice.”

The crowd moaned. Some booed.

Jim Thompson, a man Mulvaney identified as a “good friend” and an usher at his church, criticized the crowd for booing “for social justice,” he said.

Mulvaney said to the surprise of many Republicans, he supports ending for oil companies. He also said under Ryan’s plan, “if you are wealthy, you will pay more for your Medicare. If you are poor or sick, you will pay less.”

The tension in the audience reflected a larger argument taking place on Capitol Hill that Mulvaney said is preventing the Senate and House from working together. Congress likely won’t accomplish much in the next 18 months except raising the nation’s $14.3 trillion debt ceiling to increase the nation’s borrowing power, he said.

Some supporters said Mulvaney could push for even deeper cuts.

“But his hands are tied,” said Swain Sheppard, a member of the local political group GPS Conservatives for Action.

Diane Stordock said everything, even entitlements such as Medicare, must be considered for cuts to avoid a disaster. She knew very little about politics (and football) before she met her husband, Steve, but now she makes it a point to stay informed, she said.

“That’s what half the country’s not doing,” she said. “People need to get involved and start doing something.”