More Young Adults Have Health Care, Thanks To ACA 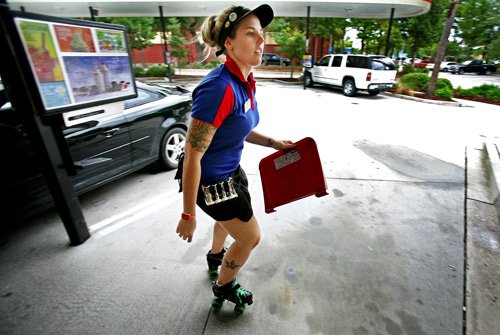 Traci Doutaz, 24, who has worked for Sonic for nine years, serves customers Thursday. She works full time and is on her parents’ insurance under the new health care law. / Photo:  Grace Beahm

The 24-year-old nursing student at Trident Technical College started working as a Sonic carhop in her Kentucky hometown when she was 15. Now, nine years later, she glides around the popular restaurant on Highway 17 in Mount Pleasant without wasting a thought on getting hurt.

Traci Doutaz, 24, who has worked for Sonic for nine years, serves customers Thursday. She works full time and is covered by her parents’ insurance under the new health care law.

Doutaz needs benefits under her mother’s health insurance plan for other reasons. She suffers from psoriatic arthritis, which causes pain, stiffness and swelling in and around her joints. She gives herself injections in the leg twice a week to relieve the pain.

Without coverage, those treatments would cost her $3,000 a month. Thanks to the Affordable Health Care Act, signed in March 2010 and effective in September 2010, Doutaz gets her medication under her mother’s plan for just a $20 co-pay.

She’s one of nearly 1 million more people between ages 19 and 25 who were insured in the first quarter of 2011, largely because of the new health care law, according to numbers from the Centers for Disease Control and Prevention. The law allows adults to draw from their parents’ health insurance until age 26.

“I have tried to get my own insurance, and it was so expensive because of my pre-existing condition that I couldn’t afford it all,” Doutaz said.

Before the Affordable Care Act went into effect, she took a semester off of school and found herself uninsured.

“I just didn’t get my medicine,” she remembered. “I was in pain.”

Exercise helps alleviate the symptoms of her arthritis so, in her free time, Doutaz plays roller derby with the Lowcountry Highrollers, a hobby with safety risks of its own.

“I’m a person who has to have health insurance all the time,” she said.

A recent Gallup survey shows that the rate of insured adults ages 18 to 25 climbed from 71 percent in the first quarter of 2010 to more than 75 percent in the second quarter of 2011. U.S. Census Bureau data from 2010 show a similar, upward trend in the number of young people with health insurance.

Shayla Murphy, a 21-year-old criminal justice student at Trident Technical College, plans to be a police officer one day. When she took off a semester, before the Affordable Health Care Act went into effect, she heard from her father’s insurance company: Enroll in school now, or lose the benefits.

“Staying on the insurance makes everything cheaper,” she said.

Previously, health insurance companies could drop children at age 19, older for full-time students. The new law means children can remain on their parents’ plans if they are married or live on their own, even if they qualify to enroll in plans through their employers.

Local insurance expert Tom Swayne, president of the David Gilston Insurance Agency in West Ashley, caught a loophole: A married couple, both husband and wife on their respective parents’ plans, became pregnant and then lost their health insurance and coverage for the baby.

“Those are the kind of things — unintended consequences of health reform — that kind of caught us off guard,” Swayne said.

More obvious are the premium increases employers must pay and the potential claims costs that could lead to rate increases in the future.

“For the most part, I do think the good does outweigh the bad,” Swayne said. Under the new law, families sometimes get cheaper group coverage, and children with pre-existing conditions don’t get turned away.

“With a lot of different issues in health reform, the devil is in the details,” Swayne said. “We still don’t know all the implications of health care reform.”

Who is covered: Children until they reach age 26.

Even if they are: Married, eligible to enroll in a plan with their employers, not living at home, not financially dependent upon parents, not in school.

Exception: Until 2014 some grand- fathered group plans do not have to provide coverage until age 26 if the young adult qualifies for group coverage outside a parent’s plan.

Centers for Disease Control and Prevention says: Percentage of insured adults ages 19 -25 rose by about 1 million people in the first quarter of 2011, compared with a year ago.

For more information: A Q&A about the law.