Please note that AZ Gov. Jan Brewer “has in turn blamed ‘Obamacare,’ meaning the federal health care overhaul, for the transplant cuts even though the Arizona vote came in March, before President Obama signed that bill into law.” This is worrisome, especially given the rumblings of Medicaid cutting that we have heard  here in S.C. 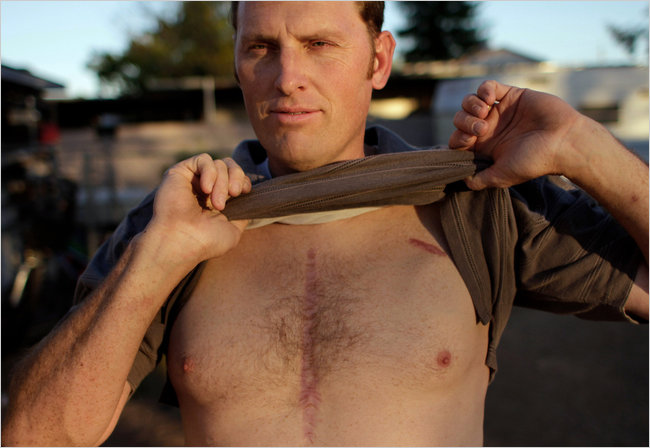 Randy Shepherd, who needs a heart transplant, showed scars from an earlier operation. He hopes a decision is reversed.

PHOENIX — Even physicians with decades of experience telling patients that their lives are nearing an end are having difficulty discussing a potentially fatal condition that has arisen in Arizona: Death by budget cut.

Effective at the beginning of October, Arizona stopped financing certain transplant operations under the state’s version of Medicaid. Many doctors say the decision amounts to a death sentence for some low-income patients, who have little chance of survival without transplants and lack the hundreds of thousands of dollars needed to pay for them.

“The most difficult discussions are those that involve patients who had been on the donor list for a year or more and now we have to tell them they’re not on the list anymore,” said Dr. Rainer Gruessner, a transplant specialist at the University of Arizona College of Medicine. “The frustration is tremendous. It’s more than frustration.”

Organ transplants are already the subject of a web of regulations, which do not guarantee that everyone in need of a life-saving organ will receive one. But Arizona’s transplant specialists are alarmed that patients who were in line to receive transplants one day were, after the state’s budget cuts to its Medicaid program, ruled ineligible the next — unless they raised the money themselves.

Francisco Felix, 32, a father of four who has hepatitis C and is in need of a liver, received news a few weeks ago that a family friend was dying and wanted to donate her liver to him. But the budget cuts meant he no longer qualified for a state-financed transplant.

He was prepared anyway at Banner Good Samaritan Medical Center as his relatives scrambled to raise the needed $200,000. When the money did not come through, the liver went to someone else on the transplant list.

“I know times are tight and cuts are needed, but you can’t cut human lives,” said Mr. Felix’s wife, Flor. “You just can’t do that.”

Such high drama is unfolding regularly here as more and more of the roughly 100 people affected by the cuts are becoming known: the father of six who died before receiving a bone marrow transplant, the plumber in need of a new heart and the high school basketball coach who struggles to breathe during games at high altitudes as she awaits a lung transplant.

“I appreciate the need for budget restraints,” said Dr. Andrew M. Yeager, a University of Arizona professor who is director of the Blood and Marrow Transplantation Program at the Arizona Cancer Center. “But when one looks at a potentially lifesaving treatment, admittedly expensive, and we have data to support efficacy, cuts like this are shortsighted and sad.”

State Medicaid officials said they recommended discontinuing some transplants only after assessing the success rates for previous patients. Among the discontinued procedures are lung transplants, liver transplants for hepatitis C patients and some bone marrow and pancreas transplants, which altogether would save the state about $4.5 million a year.

“As an agency, we understand there have been difficult cuts and there will have to be more difficult cuts looking forward,” said Jennifer Carusetta, chief legislative liaison at the state Medicaid agency.

The issue has led to a fierce political battle, with Democrats condemning the reductions as “Brewercare,” after Gov. Jan Brewer.

“We made it very clear at the time of the vote that this was a death sentence,” said State Senator Leah Landrum Taylor, a Democrat. “This is not a luxury item. We’re not talking about cosmetic surgery.”

The Republican governor has in turn blamed “Obamacare,” meaning the federal health care overhaul, for the transplant cuts even though the Arizona vote came in March, before President Obama signed that bill into law.

But a top Republican, State Representative John Kavanagh, has already pledged to reconsider at least some of the state’s cuts for transplants when the Legislature reconvenes in January. Mr. Kavanagh, chairman of the Appropriations Committee, said he does not believe lawmakers had the full picture of the effect of the cuts on patients when they voted.

“It’s difficult to be linked to a situation where people’s lives are jeopardized and turned upside down,” he said in an interview. “Thankfully no one has died as a result of this, and I believe we have time to rectify this.”

Across the country, states have restricted benefits to their Medicaid programs, according to a 50-state survey published in September by the Kaiser Commission on Medicaid and the Uninsured. But none have gone as far as Arizona in eliminating some transplants, which are considered optional services under federal law.

Before the Legislature acted, Arizona’s Medicaid agency had provided an analysis to lawmakers of the transplants that were cut, which many health experts now say was seriously flawed. For instance, the state said that 13 of 14 patients under the state’s health system who received bone marrow transplants from nonrelatives over a two-year period died within six months.

But outside specialists said the success rates were considerably higher, particularly for leukemia patients in their first remission.

“Something needs to be done,” said Dr. Emmanuel Katsanis, a bone marrow transplant expert at the University of Arizona. “There’s no doubt that people aren’t going to make it because of this decision. What do you tell someone? You need a transplant but you have to raise the money?”

Just before the Oct. 1 deadline, Mark Price, a father of six who was fighting leukemia, learned he needed a bone marrow transplant. But his doctor, Jeffrey R. Schriber, found donor matches for his transplant the very day the new rules went into effect, and Mr. Price no longer qualified for coverage by the Arizona Health Care Cost Containment System, the formal name for the state’s Medicaid program.

What happened next was at once inspirational and heart-rending.

Out of the blue, an anonymous financial donor quickly stepped forward and agreed to cover the hundreds of thousands of dollars needed for Mr. Price’s surgery. But Mr. Price died last weekend, after his cancer returned before the operation could be done. He was buried on Thursday, next to his grandfather.

“It’s not correct to say that he died as a result of the cuts,” said Dr. Schriber, who is active in lobbying for the financing to be restored. “Did it prey on his mind? Did it make his last days more difficult? No doubt.”

Elsewhere, the fund-raising is already under way.

Mr. Felix and others are now trying to raise enough for new organs through NTAF, a nonprofit organization based in Pennsylvania formerly known as the National Transplant Assistance Fund that helps transplant patients pay for their medical costs. National coverage of their plight has already led to more than $100,000 in donations for some of the patients affected by the budget cuts. The Felix family is also planning a yard sale this weekend so he does not lose the chance to get another liver.

There has been a flurry of lobbying to persuade the state to reverse the decision. Dr. Gruessner said he and others met with state health officials recently to propose other cuts associated with transplants, like eliminating tests typically conducted before surgery.

If the Legislature does decide to reconsider the cuts, one of the affected people, a plumber and father of three named Randy Shepherd, 36, who has an ailing heart and needs a transplant, plans to attend the debate.

“I’m trying not to take it personally,” he said of being cut out of the program. “None of the politicians had heard of me when they made their decision. They didn’t say, ‘Let’s kill this guy.’ ”