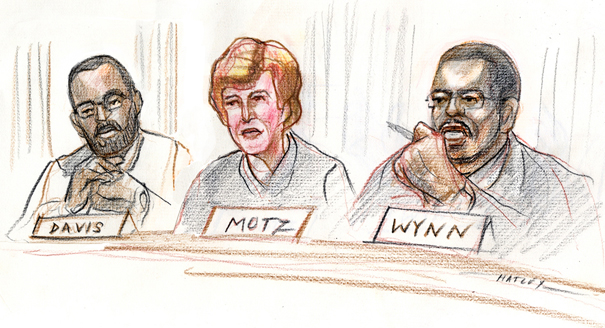 Judges sharply questioned whether Virginia has a right to sue the federal government. | AP Photo

RICHMOND, Va.— The 4th Circuit Court of Appeals peppered the health reform law’s challengers with intense rounds of questioning on Tuesday, suggesting that it could rule against both Virginia and Liberty University — two of the four cases racing toward the Supreme Court this spring and summer.

Oral arguments in both cases were held back-to-back Tuesday in front of a randomly selected panel of three judges — who all happened to be appointed by Democratic presidents.

The panel sharply questioned whether Virginia has a right to sue the federal government, suggesting that if Virginia can sue, so can a state that doesn’t like the Iraq war. The Virginia case was brought by the state’s headline-grabbing attorney general, Ken Cuccinelli.

The judges also questioned Liberty University’s claim that not entering the health insurance market is inactivity that cannot be regulated under the Commerce Clause.

In two hours of arguments — far more time than originally outlined — the judges never brought up what to do if they uphold the ruling that the individual mandate is unconstitutional. While not a sure sign that the panel could rule against the law, it’s a hint that it wasn’t on the judges’ minds during the discussions.

The panel appeared sympathetic to the government’s argument that it is using the requirement to buy insurance coverage — the key provision Liberty University and Virginia are contesting — to address what Acting Solicitor General Neal Katyal called a “massive social problem.”

One of the judges, Andre M. Davis, cited a hypothetical situation in which a group of people from Virginia got into a car accident in Maryland and a hospital incurred hundreds of thousands of dollars in medical costs.

“Is it your submission that Congress has no power to address in the aggregate what happens every day?” the judge asked lawyers for Liberty University.

But it’s the vegetable question — broccoli or asparagus, depending on the judge — that continues to be one of the most significant obstacles for the law’s supporters: If it’s OK for Congress to require Americans to buy health insurance, can it require people to buy vegetables or a membership at a health gym because they’re good for you too?

Katyal said the mandate is narrow in that it only regulates how people purchase health care. His argument is based on the premise that all Americans will consume health care at some point in their lives — whether they want to or not.

Walter E. Dellinger, who served as an acting solicitor general under then-President Bill Clinton, expects that question to continue to come up in the cases.

“And the answer is absolutely clear,” he told POLITICO outside the Richmond courtroom. “There’s not a single other product in the world that Congress could require you to purchase just because this statute is upheld. It’s because there’s no other product that people are required by law to provide you for free the way they are for emergency medical treatment.”

The panel was made up of Davis, Diana Gribbon Motz and James A. Wynn Jr. Gribbon Motz was nominated to the bench by Clinton, and Davis and Wynn were nominated by President Barack Obama.

The panel was tough on the federal government, at times, even sending Katyal back to his desk with a homework assignment while the other side argued its case.

Gribbon Motz had questioned how the word “regulation” is defined within the activity and inactivity argument.

“The power Congress has is regulation,” she said. ‘That’s right in the Constitution. That is a constitutional provision.” Gribbon Motz wanted to know: If you aren’t regulating an activity, what are you regulating?

Katyal tried to redirect the question toward one of financing — not activity.

“The question is financing. How can we regulate their means of payment for that, to avoid them externalizing the costs onto others?” he said.

Georgetown University Law Center professor Randy Barnett, who is also arguing with the National Federation of Independent Business in the multistate suit in Florida, said he interpreted the question as a sign Gribbon Motz may have reservations.

“This was really quite remarkable,” Barnett said, recounting that during the first half of the argument, it appeared the activity and inactivity question wouldn’t be an issue. “It’s only one judge who had that problem but it was significant.”

Cuccinelli and Liberty University are expected to appeal if the circuit does rule against them. Cuccinelli, who has been aiming for the Supreme Court since he filed the case shortly after Obama signed the health bill into law, said he would skip the option to have the whole 4th Circuit hear his case and directly petition the Supreme Court.

The panel appeared skeptical that the commonwealth event has the right to sue the federal government on the matter, with jduges filling most of each sides’ time arguing the issue.

A 4th Circuit ruling against Virginia could speed up the path to the Supreme Court since the federal government is expected to appeal to the full panel if it loses.

The 4th Circuit ruling — or any circuit court ruling, for that matter — is likely to do little to resolve the case. If the panel upholds the law, opponents are likely to chalk it up to yet another partisan ruling from the bench.

Next month, both the 6th Circuit and 11th Circuit are scheduled to hear appeals in similar health reform cases.

At least two judges now during questions in oral arguments have suggested that lawyers prepare to take their cases upstairs. The Supreme Court is expected to be asked to take at least one of the health cases in the 2011-12 term, which ends five months before the 2012 presidential election.

The expected ruling could force the Republican presidential contenders — who so far all oppose the health law — into issuing a detailed health reform plan of their own.

“It will be teed up right when the fall of 2012 rolls around, so the timing is kind of extraordinary,” Cuccinelli told reporters. “But not of our own making,” he said, adding that he’d rather the Supreme Court have taken the case months ago.