From The Atlanta Journal-Constitution: 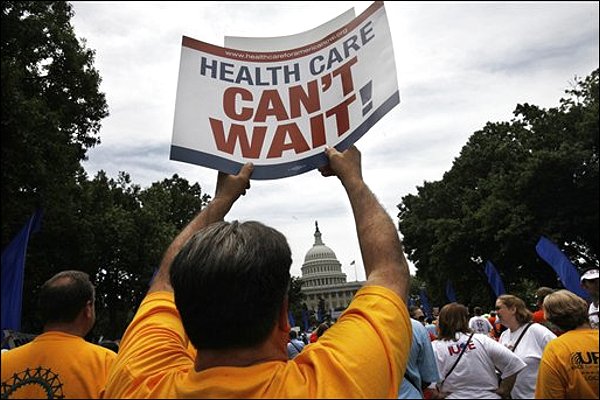 Here’s hoping we in South Carolina get a shot at purchasing our health insurance through a competitive and transparent market!

As co-owner of a small IT solutions company in Alpharetta, Julie Haley would rather be out networking and snapping up new business instead of spending hours looking for ways to curb her firm’s escalating health insurance costs.

“It really crippled us,” she said, adding that the exorbitant cost meant growing the business more slowly.

Like small businesses across Georgia and the nation, health care costs for Edge Solutions, which Haley started in 2008, have been jumping by double digits. Haley estimates in the first year alone, health care costs made up 25 percent of operating expenses – in part because without at least 10 employees insurers wouldn’t even bother talking with her. Instead, she paid pricey continuation coverage of workers’ prior plans to attract the experienced people she needed who were used to great benefits at larger companies.

Some relief could be on the way, however, with the creation of a small business insurance exchange in Georgia that experts say could reduce costs for employers and increase plan options for workers.

A committee of local health care experts, lawmakers and community leaders is exploring ways to develop an exchange — required starting in 2014 under the federal health care law — and will deliver final legislative recommendations to the governor by Dec. 15. The group is also looking at an exchange for individuals.

While opposing the health care overhaul, Gov. Nathan Deal appointed the committee earlier this year — saying it made sense to study Georgia-based solutions while the courts decide whether the law is unconstitutional. The federal government will step in to set up exchanges if states don’t.

Statewide, 96 percent of all firms have between two and 100 employees, with less than half offering employment-based insurance, according to a recent report by the committee. Some 39 percent of Georgians whose family head works at a firm with less than 10 employees have employer-based coverage. That compared with nearly 70 percent with coverage at companies with 100-plus workers, the report shows. The majority of small businesses in Georgia that do have benefits offer high-deductible plans, which means greater out-of-pocket costs for workers.

“I think people have become so frustrated with the health insurance marketplace, they are willing to try just about anything if they think it may lead to lower costs,” said Kyle Jackson, director of the local chapter of the National Federation of Independent Business.

Nationally, small businesses pay up to 18 percent more than large firms for the same health insurance policy, according to government estimates. From 2000 to 2009, the rate of firms with less than 10 people offering insurance fell from 57 percent to 46 percent. And 11 million of America’s uninsured work for businesses with less than 25 workers.

The idea behind state health insurance exchanges is to pool small businesses and their employees with millions of other Americans to increase purchasing power and competition in the market.

Open to businesses with up to 100 workers, exchanges would be designed to allow employers to choose their contribution levels to employee coverage, save money by spreading administrative costs across more companies and offer more plan choices from multiple insurers to fit people’s individual needs. All plans would meet federal and state quality standards.

“I think it can take away some of the unpredictability and help give workers and small firms more choice if they want it,” said Cindy Zeldin, director of Georgians for a Healthy Future and an exchange committee member.

Some business owners, however, are skeptical of an exchange, the health care law in general and the new regulations, financial penalties and layers of bureaucracy they could be saddled with.

One big concern is a new fee assessed on insurers – a cost that will be passed on to businesses, Jackson said. The fee will increase annually based on premium growth and could cost insurers $8 billion in 2014, rising to more than $14 billion by 2018, according to America’s Health Insurance Plans, a national trade organization.

“That’s not going to do anything to bring down rates,” he said.

A small business tax credit — for companies with fewer than 25 workers and an average wage below $50,000 – is helpful but too restrictive to benefit a large group of employers, he said.

Uncertainty surrounding the court battle over the constitutionality of the law is also a worry. Last month, the Obama administration asked the Supreme Court to hear a case regarding the health care law, which could result in a decision by next summer. The local group studying exchanges has a subcommittee looking at how to respond if the whole law or parts of it are struck down.

The uncertainty also is weighing on the job market because business owners are concerned about the impact of the health care overhaul on the cost of hiring employees, said Russ Childers, owner of a small insurance agency in Americus who also serves on the exchange committee.

Companies with at least 50 employees will also face possible penalties for not offering health coverage under the new law.

Those businesses that don’t provide benefits will be fined $2,000 a year for all employees beyond the first 30, said Tony Holmes, a partner in the Atlanta office of global consulting firm Mercer. An employer with 100 workers, for example, would pay $140,000.

Even those who do offer coverage could be fined if it’s considered unaffordable – more than 9.5 percent of a worker’s total family income, Holmes said. If it’s too expensive for some employees, those who make up to 400 percent of the federal poverty level will be eligible for the individual exchange and federal tax credits.

Garry Hill, head of the group benefits practice at insurance brokerage Sterling Risk Advisors, said the small businesses he works with already pay closer to $3,000 to $4,000 in health costs per employee.

“I can in theory scrap my health plan, pay the [$2,000] penalty and give my employees a raise and still come out ahead,” Hill said.

A big reason for providing benefits is to retain and attract employees, which in this economy isn’t an issue, he added. “Most people are just thankful to have a paycheck.”

For many small companies with slim margins, the decision of whether to offer health benefits can come down to choosing between having employees or even keeping their doors open, Holmes said. However, businesses with less than 50 workers aren’t subject to the same penalties as larger firms under the law.

Trying to keep a cap on expenses as his Marietta firm slowly grows, Brian Mayfield doesn’t offer benefits to his two full-time and four part-time employees at Techquidation, which services cash registers and barcode scanning equipment. Mayfield said he may have added one or two employees this year if things weren’t so uncertain.

“Everybody I know who owns a business, we’re all very cautious right now,” he said.

Mayfield said he wouldn’t consider a small business insurance exchange, but hopes to someday offer his workers a set amount of money they can apply toward individual plans that work for them – avoiding his exposure to premium hikes at the same time.

“I’m a believer in people being accountable for making their own choices,” he said.