If Ryan’s Medicare Plan Passes, Who Will Insure Seniors? 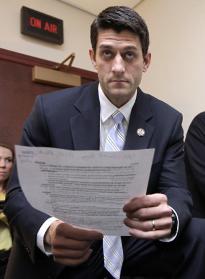 At first glance, Paul Ryan’s plan to send millions of seniors into the free market with dwindling vouchers in hand might seem a boon to the private insurance industry. But would companies even want to participate?

Unlike the Affordable Care Act, which mandated that millions of young and healthy Americans purchase insurance with government subsidies, the Paul Ryan plan would instead bring the oldest, sickest, and least profitable demographic to the table. And with the CBO projecting that the average senior would be on the hook for over two-thirds of their health care costs within just 10 years of the plan’s adoption — a proportion that is projected to worsen in the long run — the government subsidies backing them up may not bring in enough profitable customers to make things worthwhile.

“If reimbursement rates are too low to provide basic benefits, they’ll tell the government, ‘You do it,'” one insurance lobbyist told TPM. “I don’t think they can require they lose money, they’d just pull out.”

Dan Boston, a veteran lobbyist for health care providers and co-owner of Health Policy Source, said in an interview with TPM that he was taking a “wait and see” approach on the GOP budget before judging its value. (The American Hospital Association opposes the plan). But he cautioned that a major concern would be whether hospitals and private insurers would be left on the hook for low-income seniors eligible for both Medicare and Medicaid, who could run up significant costs with little hope of ever paying them off.

“I think everyone is going to be looking at the viability of the funding,” he said.

Insurers have successfully demanded funding hikes to other programs even as their clients faced far less dire circumstances than projected under Ryan’s plan, raising the question of whether Ryan’s savings would ever come to pass. Take Medicare+Choice, a private exchange for seniors created in 1997 by the GOP Congress. Under the program, the government paid the equivalent it would use to fund Medicare coverage to reimburse private HMOs instead under the theory that the free market would operate more efficiently and produce better results. Instead, insurers found they were unable to sustain a profit and began pulling out en masse. In 2000, more than 900,000 patients were dropped as HMOs deserted the program, citing inadequate federal backing and a lack of a prescription drug benefit.

“Year after year, the reimbursement rates were cut for these plans, making it increasingly unattractive for private providers to offer plans,” one Republican congressman recalled in 2009, adding that for seniors who lost coverage “the consequences were painful and the vocal anger was justified.”

That congressman was none other than Paul Ryan. And he put his money where his mouth was in 2003 by voting for President Bush’s Medicare law, which replaced Medicare+Choice with the more costly Medicare Advantage and added a pricey prescription drug benefit. The more generous system brought insurance companies back to the table, but ended up spending 114% more per patient than regular Medicare in the process.

“In theory the idea of a more competitive market would have a lot to recommend it,” MIT economist Jonathan Gruber told TPM, “But in fact it just simply hasn’t worked. We have the example, we’ve lived it, it’s Medicare Advantage, and it hasn’t worked”

The gap in spending between the Medicare Advantage and Medicare will be eliminated as part of the ACA, a move that Ryan warned for years would devastate seniors. He has apparently since changed his mind, as the same cuts are included in his own Medicare proposal. But if his budget’s savings are to ever materialize, lawmakers will have to resist the same political temptations that he succumbed to and ignore growing calls from their constituents and top donors for more federal dollars.