May 9, 2011 | Uncategorized, Understanding The New Law 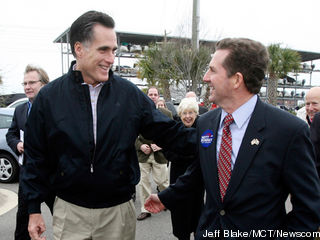 Sen. Jim DeMint (R-SC) has taken Dave Weigel for a spin in South Carolina. In 2007 DeMint endorsed Mitt Romney for President — indeed, served as his campaign co-chair — but reportedly won’t do so again unless Romney disavows his Massachusetts universal health care law, which served as a model for the Affordable Care Act, a.k.a. “ObamaCare.” Reflecting on his past support, DeMint now suggests he was duped.

“I got involved with him before that,” DeMint said, “and the concept that was presented to me was the idea of moving people from government plans to private plans. That’s what the goal was. That’s how my conversations went, and that’s how it was presented. But the way it ended up…. I cannot accept all the mandates, all the government exchanges. And it hasn’t worked.”

Flashback to January 2007. RomneyCare is such a well known achievement that Romney wins DeMint’s endorsement because of the law’s success.

“[Romney] has demonstrated, when he stepped into government in a very difficult state, that he could work in a difficult partisan environment, take some good conservative ideas, like private health insurance, and apply them to the need to have everyone insured,” DeMint said. “Those kind of ideas show an ability to bring people together that we haven’t seen in national politics for a while. We don’t need the nation to be more polarized.”

Then in February of that year DeMint explained on Fox News that Romney should do for America what he had done for Massachusetts with health care: “Well, that’s something that I think we should do for the whole country.”

And the governor just looked at the numbers like a good businessman and realized that we could give people private insurance policies cheaper than we could provide free health care. And what that does is spread out the risk; it gets the government out of the health care business and actually makes the health care system work a lot better.The legislature in Massachusetts made it a little harder to make these policies affordable, but we’ve got probably over 20 states now that are trying to copy what he did, and that’s a good sign that people think he’s on the right track.

Then in October, in a video he posted to his YouTube account, DeMint explained that health care reform was one of Romney’s achievements that proved he knew how to make “freedom work for everyone.” (DeMint’s post was removed from YouTube shortly after this article first appeared at Talking Points Memo.)