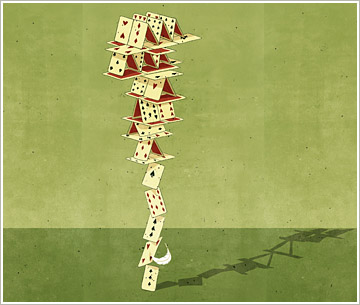 It’s a political pickle, all right. The same health insurance goliaths that secretly bankrolled  anti-Obama campaigns in the midterm elections, while publicly proclaiming cooperation with the White House, now have to persuade their politicians to lay off the individual mandate, no matter what their Tea Party supporters say.

When the White House and Democratic lawmakers wrote the health-care overhaul bill, they concocted a sweet coating for the bitter medicine the health industry would have to swallow. In exchange for tighter regulation and numerous new directives, insurers, drugmakers, hospitals, and physicians got some 30 million new paying customers under the individual mandate requiring almost everyone to buy insurance starting in 2014 or pay a fine.

The individual mandate is now under attack in the courts and on Capitol Hill by Republicans, libertarians, and Tea Party enthusiasts who call it an affront to personal liberty. The industry, however, views it as the bedrock supporting the entire health reform law and is lobbying to keep it. The prospect of a vastly bigger market has helped spark a 7.4 percent rise since Jan. 1 in the Standard & Poor’s 500 Managed Health Care Index of publicly traded health-care companies.

For insurers, eliminating millions of potential customers while keeping other aspects of the overhaul would be a “nuclear nightmare,” says Robert Laszewski, president of Health Policy and Strategy Associates, a consulting firm that works with insurers. It would leave insurers without the extra revenue to cover higher costs from the law’s ban on the denial of coverage to people with pre-existing conditions or charging sicker patients higher premiums. “It’s the No. 1 lobby issue in the insurance industry right now,” says Laszewski.

At the same time, some industry groups are worried that Republican plans to undo the centerpiece of the law, which President Barack Obama signed in March, could unravel other backroom deals they cut with the White House, forcing them to fight costly legislative battles all over again.

Drugmakers, for example, agreed to pay $80 billion in taxes over 10 years and give discounts to help the elderly pay for drugs. In return, the manufacturers are guaranteed millions of new customers. The White House and Senate Democrats also arranged not to allow the Medicare program, which covers the elderly and disabled, to negotiate drug prices, as do most state Medicaid programs that cover the poor. Additionally, the Administration agreed to continue blocking the re-importation of drugs from Canada. Some lawmakers in both parties favor re-importation, and the pharmaceutical industry adamantly opposes it. Both deals help drugmakers fend off pressures to lower prices. Hospitals, drug and device makers, and doctors also stand to benefit from the law’s expansion of Medicaid coverage to 16 million more people by 2017.

Republicans have already proposed alternatives to the mandate that put less emphasis on covering the uninsured. Their plan, offered by soon-to-be Speaker of the House John A. Boehner of Ohio, has no individual mandate, allows people to buy coverage across state lines, and would cover just 3 million people, according to the Congressional Budget Office.

Republicans traditionally have supported the insurance industry, but the Tea Party’s success in redefining the debate in Washington has changed the equation, says Laszewski. Democratic ranks were also thinned in the recent midterm elections that, in many districts, turned on voter distaste for the health law. Now, neither party may be happy with the individual mandate. “It’s hard to find a provision with more bipartisan opposition,” says Doug Badger, a lobbyist and partner with Nickles Group, which counts Philadelphia-based insurer Cigna (CI) among its clients. Says Thomas P. Miller, a health-care fellow at the American Enterprise Institute: “When you pull that mandate apart from the rest, you have to wonder why you’re doing all those other things.”

Cigna Chief Executive Officer David M. Cordani has said he does not think it’s in the country’s best interest to repeal the law or pull out specific provisions. “It’s a dangerous path to remove individual components from the law without understanding the impact,” he said in a Nov. 9 PBS television interview.

The insurance mandate, though, is more than just a policy issue for some Republicans. It’s an assault on the Constitution. In the Senate, for instance, Utah Republican Orrin G. Hatch, the current ranking member of the Judiciary Committee, called the mandate “an astonishing expansion of federal power and busts the limits that the Constitution imposes on the federal government.”

In the House, Republican Representative Eric Cantor of Virginia, who will be House Majority Leader in January, “is not supportive” of the mandate, according to John Murray, his communications director. “The individual mandate is something the insurance industry is hyperfocused on,” Murray says. “They feel they’ve got to have that to be successful. Our team is not supportive of that. We don’t like mandates.”

While Democrats who backed the law might now seem a more natural ally in defending the mandate, issues exist there as well. Insurers just spent $1.1 million funding opponents to Democratic campaigns. Now they will have to count on many of those same Democrats to defend them. Some may not. Joe Manchin, the Democratic senator-elect from West Virginia, called the mandate “far overreaching” during his campaign. The U.S. shouldn’t “mandate and dictate” how people act, he said. Manchin did not respond to requests for comment.

The one thing going for the individual mandate may be political gridlock. Next year’s split in Congress between Democrats who control the Senate and Republicans who will control the House could lead to a standoff that results in little change. Republican efforts to roll back the law over the next two years could be a table-setter for the real push to come after the next election, says James C. Capretta, a health-care fellow at the Ethics and Public Policy Center, a Washington think tank. “The decisive battle on the overhaul is likely to be the 2012 Presidential contest; that’s what everyone’s preparing for.”

The bottom line: As Republicans take aim at the individual mandate in the health reform law, health-care industry groups are lobbying to preserve it.

Drew Armstrong is a reporter for Bloomberg News.