Gosh Y’all, Could “Obamacare” Be Working?!!

From The New Republic: 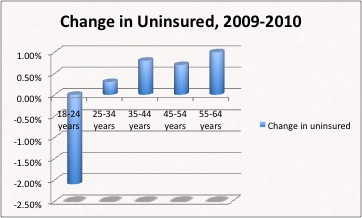 Need a reason to believe the Affordable Care Act is starting to work? The Census Bureau just gave you a half million of them.

That’s how many young adults had health insurance in 2010, as compared to 2009, according to the official estimates. Or, to put it another way, the proportion of 18- to 24-year olds without health insurance fell, by roughly two percentage points, last year.

It’s pretty remarkable, given what was happening in the rest of the population. For every other group of non-elderly adults, from 35 through 64 years of age, the proportion without health insurance increased. (See the graph above.)

You expect that sort of data, given economic conditions: When people lose jobs, they also lose access to employer-sponsored insurance. When their incomes fall or their debts rise, they have a harder time keeping up with premiums.

But then why aren’t 18- to 24-year-olds suffering the same fate? What makes them so special?

Nobody can be certain right now. Health insurance estimates are famously quirky and these data frequently mask critical information. But, as noted yesterday, the circumstantial evidence suggests, very strongly, that the Affordable Care Act is the primary factor.

Remember, one of the first provisions to take effect was a requirement that insurers allow young adults, up to age 26, to stay on their parents’ policies if employer-sponsored insurance is not available. Even though that requirement didn’t kick in until the fall, several insurers began offering such coverage earlier, in anticipation of the new rule. Media reports, like this one from Kaiser Health News, have suggested large numbers of young people are signing up for the newly available coverage, even more quickly than the government had anticipated.

Brad Wright, a smart health care researcher now at Brown University, sums it all up in a post at his blog:

Historically, economic downturns coincide with increases in the number of uninsured, as people lose their jobs and, thanks to the design of our health care system, their insurance coverage. So, the unchanged number of uninsured masks what actually happened: Roughly 810,000 middle-aged adults, those ages 45 to 64, were likely let go from their jobs, didn’t yet qualify for Medicare, and ended up uninsured. Meanwhile, some 494,000 young adults, those ages 18 to 25, gained coverage, which seems to point to the ACA provision allowing children to stay on their parents’ plans until age 26 that went into effect in the fall of 2010. Of course, there may be other explanations, but the simplest explanation is likely the right one.

Of course, the young adult provision is just one small part of the new health care law. The really big increases in insurance coverage won’t happen until 2014, when Medicaid expands to cover a much larger proportion of the low-income population and the federal government begins offering subsidies, plus the opportunity to buy regulated coverage through new insurance exchanges, to middle class people who can’t get employer coverage. And, I’m sure, critics would argue the gains in coverage either don’t make much difference or aren’t worth the harm the law would bring.

Still, these numbers are striking – and seem to suggest that the Affordable Care Act is already helping large numbers of people.