…that would screw seniors out of their Medicare and widen the national deficit.

From Paul Krugman’s NYT blog, The Conscience of  a Liberal:

Gosh. For a plan that supposedly sets a new standard of seriousness, Paul Ryan’s vision (pdf) depends an awful lot on unicorn sightings — belief in the impossible. Let me review the top three unicorns.

First, the plan assumes that tax cuts will set off a literally unprecedented boom. Here’s again, is what is assumed about unemployment:

So Ryan is claiming that unemployment will plunge right away; that by 2015 it will be down to the levels at the peak of the 1990s boom (and far below anything achieved under the sainted Ronald Reagan); and that by 2021 it will be below 3 percent, a level we haven’t seen in more than half a century. Right.

Then there’s the Medicare business. According to the CBO analysis, a typical senior would end up spending more than twice as much of his or her own income on health care as under current law. As Dean Baker points out, this means that seniors would end up paying most of their income for health care. Again, right.

But in a way, the worst part isn’t the Medicare plan: it’s the fact — which so far has not penetrated the debate — that the biggest source of supposed savings in the plan isn’t actually health care, it’s an assumption that federal spending on everything except health and Social Security can somehow be squeezed, as a percent of GDP, to a small fraction of current levels. Here’s the table, from Ryan’s own report: 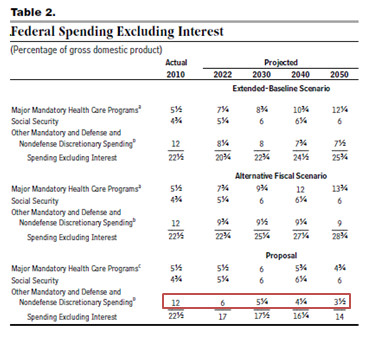 Notice the marked area at the bottom: Ryan is assuming that everything aside from health and SS can be squeezed from 12 percent of GDP now to 3 1/2 percent of GDP. That’s bigger than the assumed cut in health care spending relative to baseline; it accounts for all of the projected deficit reduction, since the alleged health savings are all used to finance tax cuts. And how is this supposed to be accomplished? Not explained.

This isn’t a serious proposal; it’s a strange combination of cruelty and insanely wishful thinking.