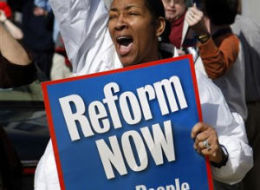 Washington – The public is divided over the idea of requiring all Americans to have health insurance, according to a new national survey. But a CNN/ORC International Poll also indicates that support for the proposal, a cornerstone of the 2010 health care reform law, has risen since June.

The survey’s Monday release comes as the Supreme Court has agreed to decide the constitutionality of the sweeping health care reform law that was passed by a Democratic Congress and championed by President Barack Obama. The justices made their announcement in a brief order issued on Monday. Oral arguments would likely be held in late February or March, with a ruling by June, assuring the blockbuster issue will become a hot-button political issue in a presidential election year.

According to the poll, 52% of Americans favor mandatory health insurance, up from 44% in June. The survey indicates that 47% oppose the health insurance mandate, down from 54% in early summer.

“The health insurance mandate has gained most support since June among older Americans and among lower-income Americans,” says CNN Polling Director Keating Holland. “A majority of independents opposed the measure in June, but 52 percent of them now favor it.”

The poll was conducted for CNN by ORC International Poll from November 11-13, with 1,036 adult Americans questioned by telephone. The survey’s overall sampling error is plus or minus three percentage points.