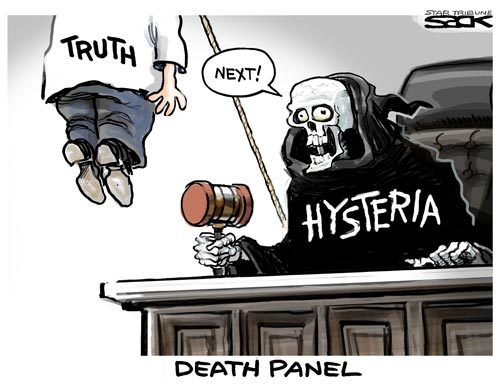 The debate over “death panels” is hard to kill — but at least one Senate Democratic aide says the issue has now become “Kryptonite for the Right,” thanks to the way a new Medicare regulation is written.

The new policy, buried in the 692-page Medicare fee schedule, allows payment to doctors who provide end-of-life counseling to patients on a voluntary basis. “Voluntary” is the key word, say supporters of the policy.

“When people recognize that they will now have coverage for VOLUNTARY advance-care-planning, they may actually question the motives of those who told them health care reform would involve ‘death panels’,” the Senate Democratic aide wrote in an e-mail to POLITICO.
The regulation was published earlier this month in the Federal Register and was the subject of a Dec. 25 front-page story in The New York Times.

But Republicans may not let this one go. Betsy McCaughey, a Republican health policy expert and the former lieutenant governor of New York, coined the phrase “death panel” — which was famously tweeted by Sarah Palin during the reform debate.

“Doctors should always be paid for the time they spend counseling patients, including about the tough choices they are making toward the end of their lives. But the government shouldn’t be scripting what doctors should say to patients. The government isn’t a trusted educator, it has a stake in reducing the care provided to elderly patients,” McCaughey, an ardent critic of the health reform law, told POLITICO.

McCaughey, who founded and chairs the Committee to Reduce Infection Deaths, said that the new rule signals that the Obama administration may take the new policy a step further.

“When end-of-life counseling first came up, doctors’ quality ratings were going to be determined in part by the percentage of patients who have a living will and those who follow it up,” she said. “If they make advance-care planning a protocol … it’s not voluntary, despite the use of the word.“

The rule allows payment for advance-care planning as part of an annual preventive exam. It defines the term as “verbal or written information” that pertains to an “individual’s ability to prepare an advance directive in the case where an injury or illness causes the individual to be unable to make health care decisions. It also addresses whether “the physician is willing to follow the individual’s wishes as expressed in an advance directive.”

Richard Sorian, assistant secretary of Public Affairs for HHS, said the regulation does not require that the doctor say anything, but merely defines what advance-care planning is.

As for tying the percentage of patients that create an advance directive to quality measures, Sorian said he doesn’t believe that the regulation addresses that issue.

One of the measures used in the Physician Quality Reporting Initiative that doctors can voluntarily report to earn bonus payments is related to having a conversation about end-of-life care, Sorian acknowledged. But that is just one of dozens of different measures that doctors can choose to report in exchange for bonus payments, he stressed.

Sorian also clarified that it was the Bush administration that first implemented regulations regarding end-of-life counseling. The wellness visit began as a “Welcome to Medicare” exam, which was created by the Republican-led Congress in the Medicare Modernization Act of 2003. In 2008, when Democrats held the majority, Congress passed the Medicare Improvements for Patients and Providers Act, which modified the exam to include end-of-life planning. The Bush administration first implemented regulations that included the end-of life planning as part of the wellness visit created in MIPPA.

Sorian explained that the annual wellness exam is much broader and can include discussions about cholesterol, nutrition and will be used by doctors to set a “baseline” for patients.

The availability of discussions about advance directives is a requirement for conditions of participation of hospitals, under Medicare.

“What’s interesting about this rule is that it’s a lot less prescriptive than the original health reform law, which did outline some of the topics that had to be discussed,” Jon Radulovic, vice president of communication for the National Hospice and Palliative Care Organization, said of the regulation, which the organization supports.

Radulovic said the regulation will be the springboard for patients to make use of an important benefit. “We feel this gives a patient or Medicare beneficiary the opportunity to become an informed consumer and make their own choices that reflect their own beliefs,” he said. As patients age, he said, their views on hospice or palliative care might evolve and the regulation allows for that.

“This is not about rationing care or saving money, it’s about making sure patients understand what options are available before there is a health care crisis,” he said.

But the Senate Democratic aide did talk about how this benefit might save money for the Medicare program over time.

“If people take advantage of it, it could save billions for taxpayers,” the aide said, by respecting the wishes of people who realize that Medicare coverage is available for end-of-life counseling, as well as for hospice and palliative care.

Recent data suggest that Medicare patients are making greater use of hospice. The Medicare Payment Advisory Commission reported last year that utilization of hospice by Medicare beneficiaries has dramatically increased since 2000. The commission found that in 2005, almost 40 percent of Medicare patients who died had elected hospice, “suggesting that many more beneficiaries have access to hospice than was the case” in 1983 when the benefit was originally added to Medicare.

By 2007, nearly 1 million Medicare patients were in hospice and Medicare spending for the benefit “more than tripled, from $2.9 billion [in 2000] to just over $10 billion.” Still, because hospice care is cheaper than standard medical care for the terminally ill, generally, it saves taxpayers’ money.