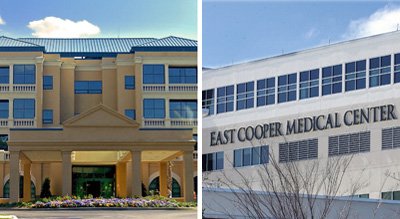 Payment to Roper St. Francis Healthcare’s Bon Secours St. Francis Hospital in West Ashley (left) and East Cooper Medical Center in Mount Pleasant are among the facilities that will see their payments for providing uncompensated care cut by the state.

About a third of hospitals serving South Carolinians collected a combined $110 million in state and federal taxpayer money last year through a program designed to reward medical centers that provide high levels of uncompensated care.

But those 18 hospitals actually do not provide a disproportionate amount of care to uninsured South Carolinians and those enrolled in government-sponsored insurance programs.

Now the state is cutting payments to those hospitals by about 8 percent, saving taxpayers nearly $9 million annually.

“It is unfortunate that only a handful of the hospitals must bear the burden of the state’s remaining Medicaid funding shortfall,” according to a statement from Wendy Dukes, director of reimbursement for the nonprofit Roper St. Francis Healthcare system. The systems’ hospitals stand to lose about $1.5 million.

The state’s so-called “disproportionate share” payments are intended to encourage hospitals to treat indigent patients despite losing money on them. The payments — paid in annual lump sums — do not completely cover hospitals’ losses. But they reduce the burden on those that treat many patients who are uninsured or enrolled in Medicaid, the relatively low-reimbursing government health insurance program for the poor and disabled.

The formula used to distribute funds, however, has not “considered at all whether you actually do a disproportionate share,” Keck said. Hospitals providing the lowest proportions of uncompensated care still received significant annual reimbursements from the state.

MUSC had a greater total loss than Roper and received a lower reimbursement proportionally: About 13 percent of their costs were reimbursed compared to 20 percent for Roper.

By comparison, the Medical University of South Carolina received only about $42 million to offset the cost of providing about $312 million in uncompensated care.

The state’s new reductions will cut Roper’s payment but will spare MUSC.

Like MUSC, Trident Health System — which operates medical centers in North Charleston and Summerville — will be unaffected because it provides a proportionally substantial amount of uncompensated care.

Geography is among the factors that influence the number of uninsured and Medicaid patients a hospital treats. Rural and inner-city hospitals could be expected to treat more indigent patients than suburban hospitals, hospital finance experts said. Mission is another component: Hospitals that identify themselves as teaching, safety-net or charity hospitals also could be expected to perform more uncompensated care.

But that isn’t always the case, said Sue Berkowitz, director of S.C. Appleseed Legal Justice Center in Columbia. Roper St. Francis Healthcare, for example, receives tax advantages to operate as a charity. Its hospitals, however, are among the 18 that provide the lowest proportions of uncompensated care statewide.

“They’re not holding themselves out to the people who need free care,” said Berkowitz, whose nonprofit group advocates on behalf of disadvantaged South Carolinians. “They’re not paying taxes. They should be giving away more free care to the uninsured.”

Although her group has opposed other Medicaid reductions, Berkowitz does not object to the disproportionate-share payment cuts. Affected hospitals are unlikely to reign in uncompensated care dramatically as a result of the cut, she said.

“Even with full payments, some hospitals are not doing what they’re supposed to be doing,” she said. “Automatically rewarding them is not working.”

South Carolina’s disproportionate-share program distributed more than $468 million in state and federal dollars to hospitals in the most recent fiscal year, according to the S.C. Department of Health and Human Services. A fraction of the money originally is collected through a “provider tax” paid by hospitals.

Although details only recently have been finalized, the Department of Health and Human Services announced the disproportionate-share cut in June as part of the effort to bridge its budget gap. The reduction will cut more than $8.7 million from the Medicaid program, according to data provided by the department.