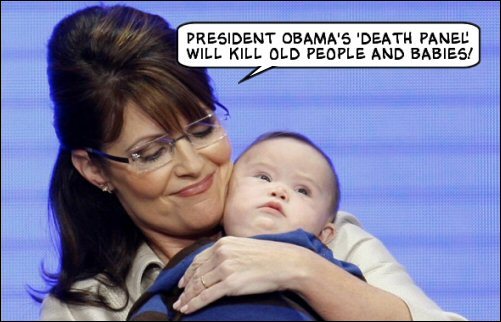 From The San Jose Mercury News:

‘Death panels’ are back, and that’s good news

The ugly rumor last year that President Barack Obama favored government-sponsored “death panels” to decide which patients were worthy of living was a twisted, cynical campaign designed to simultaneously kill health care reform and portray the president as an extremist. So we’re glad the topic resurfaced Sunday.

New Medicare regulations taking effect Saturday will pay doctors who advise patients on end-of-life care, including options for advance directives on how they want to be treated. This is all the health care reform proposal ever intended.

The flurry of renewed attention gives Obama an opportunity to make clear what he failed to articulate during the health care debate. He should explain why everyone should have the right to end-of-life counseling. Anyone who has watched a loved one suffer needlessly in the last days of life — or has seen someone’s wishes ignored because the proper forms were never filled out — knows all too well the value of this compassionate service.

The most outrageous claim by the president’s detractors, including Sarah Palin, Glenn Beck and Iowa Sen. Charles Grassley, was the notion that the proposal takes control out of patients’ hands and hands it over to the government. Grassley called the end-of-life provision “a government-run plan to decide when to pull the plug on grandma.”

This was the opposite of the truth. The new regulations will give doctors the ability to have a discussion with patients about their options so that they can make their own informed decisions about end-of-life care. This includes whether they want aggressive, life-sustaining treatment even if they’re in pain and there is no hope of recovery.

Americans need a culture change in the way we talk about death. The subject makes us uncomfortable, but we all will die someday. Far too many people wind up spending a half-million dollars on treatment that extends their lives for a few weeks or months, often the most painful of their existence, and way too often against their wishes.

Opting out of that care does save money, but it can also be the most humane thing to do if it’s what the patient wants. It is not a matter of causing death but of declining to intervene to thwart the natural process.

We should plan the end of our lives much like we plan our wills — with the help of an expert. Doctors and nurses have the experience and knowledge to lay out options, not precluding family decisions but informing them. They advise patients to talk to family and friends and make clear their wishes on what measures to take to extend life as well as on whether they wish to die at home.

It’s a great relief to families when they don’t have to agonize — or worse, argue — over what a loved one intended. A clear, simple directive offers peace of mind.

The president needs to make clear to the American people what his policy actually says and does. And if Palin, Beck et al. want to portray it as a step away from government-mandated euthanasia, let that be on their consciences.